Falling In Love With the Barranquilla Tourism 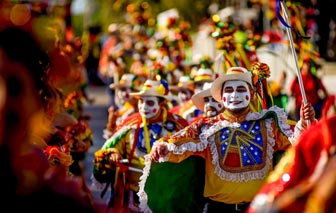 Fall in love with how much colors the Barranquilla tourism and culture has.

Situated between two great cities, Santa Marta and Cartagena, Barranquilla often gets overlooked by tourists. It is mostly excluded from the list of places to visit when traveling to Colombia. However, what most people miss are the wonders that lie within the city of Barranquilla.

Due to its location in the northern part of Colombia, and having the principal port of the country, Barranquilla is better known as La Puerta de Oro de Colombia (The Golden Gate of Colombia). due to its location, as well as housing the most important maritime port of The Republic of Colombia. Other than being the city where the Rio Magdalena meets and empties in the Caribbean Sea, it has more to offer in its tourism that will surely make any tourist fall in love with it. Here are some of the wonders of Barranquilla that are worth falling in love with:


Barranquilla may not often be included in most of the travelers’ bucket list, but it is no doubt a place of great experiences that is purely unique to the place. With how much it possesses, it is not pretty difficult to fall in love and maybe find love in this Latin American city.