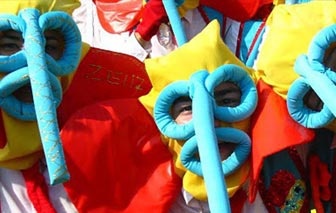 Enjoy the vibrancy and fun of the Barranquilla carnival as you experience the beautiful blend of a different culture.

If you want to see the vibrancy and richness of Latin American culture up close and personal, taking part in their festivals is the best way to do it. Among these celebrations is the Carnaval de Barranquilla (Barranquilla Carnival), the second biggest carnival in the world next to Rio de Janeiro’s Rio Carnival. This famous festival is a celebration of everything that means to be a Colombian, with dancing, music, and parades that turn its streets into a vibrant pathway of colors and fun.

Barranquilla may not have the glitz and glamor of other Colombian cities, but it turns into a place of bursting colors and cultural experiences during the four-day annual celebration. Like Rio de Janeiro, this is a celebration not to be missed. Thus, here’s everything you need to know about Barranquilla Carnival:


The boost of Barranquilla tourism owes it to this cultural heritage --- Carnaval de Barranquilla. It is most definitely a sight to see and a celebration of a culture that is not to be missed.